The NOAA-funded Global Drifter Program (GDP) supports more than 1,250 surface Lagrangian drifters and is the largest component of the Global Surface Drifting Buoy Array, a branch of NOAA’s Global Ocean Observing System (GOOS) under the NOAA Global Ocean Monitoring and Observing (GOMO) program. The GDP is also a scientific project of the Data Buoy Cooperation Panel (DBCP) of the World Meteorological Organization.

The GDP conducts research and supports scientific interpretation of the drifter data. A large number of peer-reviewed papers that make direct use of the drifter data have been published (see drifter bibliography). The GDP also provides most of the drifters needed to maintain the Global Drifter Array; this program has been in existence at Scripps Institution of Oceanography for over 40 years (see program history below). It creates new synergies with other federal agencies such as the US Office of Naval Research (ONR) and the National Aeronautics and Space Administration (NASA), thereby increasing the number of drifters reporting real-time data for science, climate assessment, and forecasting. Scientists working under the GDP at the LDL develop new drifters and support and enhance the Global Drifter Array during research cruises from ships of opportunity and as part of regional projects coordinated with other federal agencies and sponsors. The GDP also liaises with many international partners to upgrade drifters with barometers. Real-time data are provided from the GDP Data Processing Center where a redundant network of physical and virtual data servers is managed and maintained to support the real-time drifter data relay. This group also manages the Iridium satellite traffic from the GDP drifters, decodes and archives the satellite messages, and posts the drifter data to the Global Telecommunication System (GTS) of the World Weather Watch following the latest formatting recommendations of the World Meteorological Organization. At this point, the decoded data are provided to the drifter Data Assembly Center at AOML, other management activities, and other GDP partners for delayed mode quality control. The real-time data that are distributed through the GTS are also available through the LDL/GDP website and web server interfaces.

PROVIDE a data management system for scientific use of these data.

INNOVATE and add new technology to serve emerging needs, such as the Directional Wave Spectra Drifter (DWSD™), its air-deployable version, and customized drifters with scientific grade atmospheric and oceanographic sensors.

INSTALL barometers on every drifter to study the variability of the atmospheric circulation, compute climate indexes, and help weather forecasting activities.

1 The TARGET SIZE of the network is set as a 5 x 5 degree array, which requires ~1,300 drifters. The current size is based on metrics on the requirements for global observations of ocean currents and SST.

Lagrangian Drifter Laboratory
The LDL was created in 2017 by Dr. Luca Centurioni to support the GDP and his other research needs. The LDL innovates Lagrangian drifter technology and fabricates many of the drifters needed to maintain the GDP array. It supports research projects sponsored by federal agencies such as the US Office of Naval Research (ONR) and the National Aeronautics and Space Administration (NASA) for several principal investigators at Scripps Institution of Oceanography and other institutions around the world. The LDL also supports the logistics needs of the GDP and other projects for which Dr. Centurioni is PI. The GDP Data Processing Center is located at the LDL.

Atlantic Oceanographic and Meteorological Laboratory
AOML, in coordination with the LDL, organizes most GDP drifter deployments to make sure that the GDP array is optimally configured. AOML also liaises with worldwide partners to upgrade GDP drifters with barometers. AOML informs the LDL Data Processing Center when a drifter needs to be blacklisted on the GTS. The Data Assembly Center at AOML performs delayed mode quality control and assembles the GDP data set for scientific uses. The QC drifter data, products derived from the data, and the GDP bibliography are available from the AOML/GDP website. 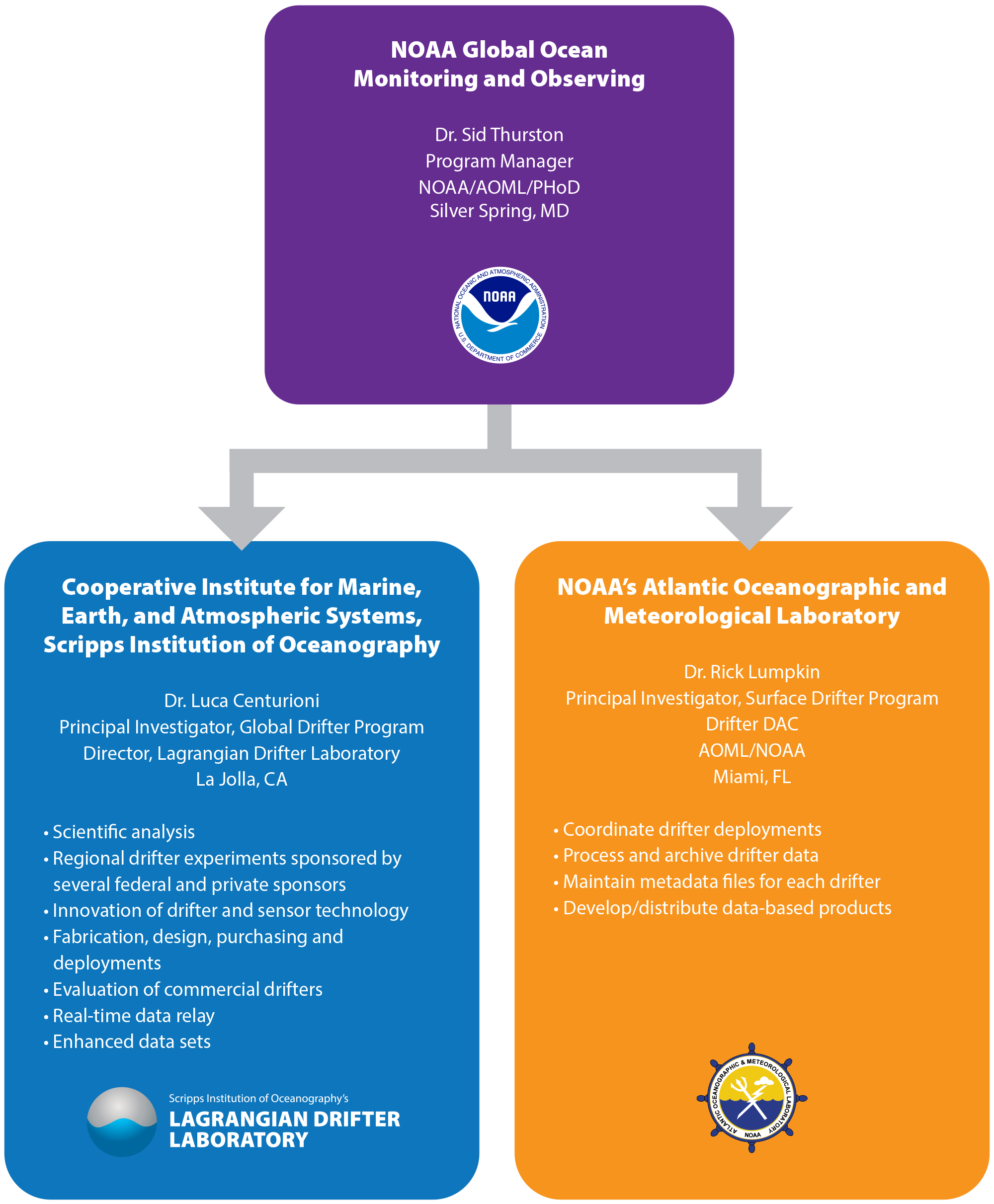 History of the Global Drifter Array

In the late 1980s, Peter Niiler and a small team of scientists began deploying drifters in the tropical Pacific Ocean with the support of the Tropical Ocean and Global Atmosphere Program of the World Climate Research Programme (WCRP).

In subsequent years, with the continuing support of the Office of Naval Research, Minerals Management Service, NOAA, and NASA, Dr. Niiler nurtured and directed several generations of scientists and engineers in perfecting Lagrangian drifter technology and the scientific interpretation of the data collected in several regional experiments. Having demonstrated the success of the Lagrangian approach to observe the large-scale, near-surface circulation, Dr. Niiler was able to gather robust national and international support for establishing a global scientific program. The Drifter Data Center at NOAA’s AOML in Miami, Florida, was created in the early 1980s, and mass production of drifters was initiated. The target size of the array was set at 1,250 drifters, based on the requirements for reducing the potential bias of SST observations from satellites. By the beginning of the twenty-first century, the GDP (Niiler, 2001) was fully established, and accurate global observations of 15 m depth ocean currents and SST were routinely obtained. On September 18, 2005, Dr. Niiler and Mike Johnson of NOAA’s Office of Climate Observations deployed Global Drifter Program drifter number 1,250 from the tall ship Silva off Halifax, Nova Scotia, and the global drifter array became the first completed component of GOOS.

The GDP conceived by Peter Niiler and his colleagues is now the principal scientific component of the Global Surface Drifting Buoy Array, a branch of NOAA’s GOOS and a scientific project of the DBCP, a joint body of the WMO and the Intergovernmental Oceanographic Commission of the United Nations Educational, Scientific, and Cultural Organization (IOC/UNESCO). 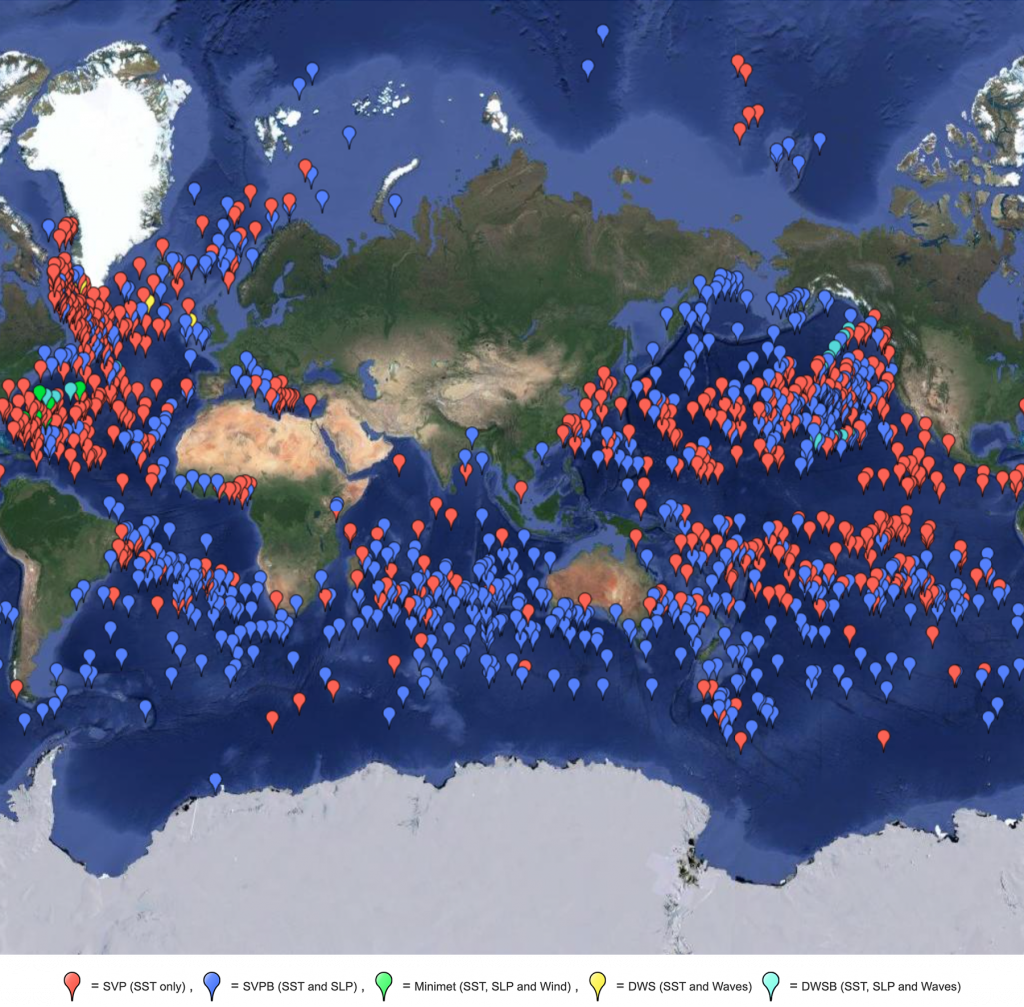